Biochar is Fantastic – Don’t use your Green Bin! 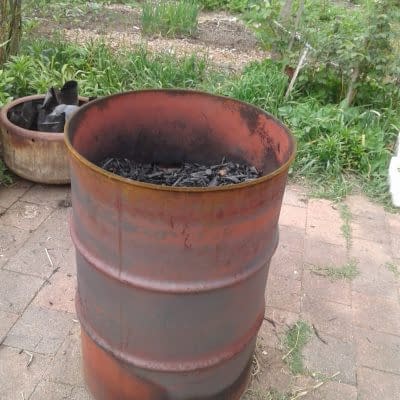 Biochar: make your own the easy way.

Our soil is one of the worst imaginable: a layer of fill (concrete rubble, bricks, sand) over a swamp. It combines lack of soil with poor drainage. I still manage to grow all our vegetables and potatoes there, but given the circumstances I am on the best way to become a soil nerd.

No one in the Blue Mountains should be able to grow anything at all according to the soil classification. You find: Kandosols, mainly around the villages, Rudosols, Kurosols and Tenosols. All of these soil types are useful for grazing at most. The map is available here: www.arcgis.com/home/webmap/viewer.html?url=http%3A%2F%2Fmapprod1.environment.nsw.gov.au%2Farcgis%2Frest%2Fservices%2FSoil%2FSoils_ASC_SoilTypes_EDP%2FMapServer&source=sd#

And the explanation of the soil types here: http://www.clw.csiro.au/aclep/asc/Soil_Poster.pdf

One of the methods I use to improve our soil is Biochar which means charcoal with added nutrients. You can purchase Biochar or use woody garden waste and make your own.

What does charcoal do to your soil and why it has to be activated?

Charcoal as such is not a fertilizer. Biochar’s positive effect on the soil is due to porosity which increases the ‘holding capacity’ of the soil, so that nutrients are less likely to be leached out.

In agricultural language the holding capacity is called cation exchange capacity (CEC). It is the total capacity of a soil to hold exchangeable cations. Cations are positively charged molecules and in terms of plant nutrients they are: ammonium (NH+4), calcium, magnesium, and potassium.

Adding Biochar has more benefits: it increases the water holding capacity, the soil aeration and can house gazillions of microbes.

If you would add charcoal directly to the soil, without activating, it acts like a sponge holding on nutrients which are then unavailable to the plants. This effect would last about one or two years.

When not to use charcoal:

Biochar is an ancient ingredient of Terra Preta

Biochar is a new buzzword in permaculture circles, but in reality it is ancient. Scientists found deep, very fertile soils patches within the shallow and relatively infertile soil of the amazon rainforest, called terra preta do índio which translates to black soil of the Indians. It is human made soil, dated between 450 BCE and 950 CE. It fed the densely populated areas along the Amazon River. The exact way the terra preta soil was made is still unknown, but charcoal was an important ingredient, together with faeces, pottery shards, manure, compost and shells.

Why would you want to make Biochar?

Too much wooden debris in a compost pile is a nuisance, because it needs years to break down and you shovel it in a circle. Make some biochar instead, it has scientifically long lasting improvements on your soil.

Making biochar is not all that complicated, especially if you like playing with fire. It is a very sustainable way to get rid of your woody garden debris, much better than throwing it in the green bin! Did you know that the Blue Mountains City council sends each and every green waste truck to Blayney, a 146km single or 292 km round trip – and calls it ‘green’! I would really prefer to see a local biochar producer instead.

My partner Michal produces charcoal in a simple drum and uses none of the contraptions you find all over youtube (and have to store in your shed). Go for it but: inform the fire service, watch fire bans, don’t burn in dry or windy weather, don’t leave the drum alone and have a hose ready.

This is the journey our green waste takes, and remember: it is two ways for each tuck and I would really like to know how many trucks are going that way each week:

Why Everyone Needs a Water Tank

Artichoke Leaf Tea – Easily Grown in Your Own Garden!

Poke Tincture – the most Beautiful Tincture ever! (Phytolacca Americana)

Tree Pruning – NOT a work for cheap contractors!

Subscribe to our news! Our newsletters are mainly about invitation for events. I’ll promise work in the garden  and not write very often!